Dogs are believed to be  the first domesticated animal. It has long been thought that this domestication occured in the fertile crescent of the middle-east where man first learnt to cultivate crops and settled in permanent non-nomadic life style. In fact it is probably wolves that first lived with man and that this association led to the changes in wolf morphology resulting in what we now call dogs. This place of origin is based on archeological evidence but recent genetic studies by Savoleinen et.al. point to an area south of the Yangtse river in China as being more likely. This is based on dogs in this area having a greater genetic diversity than elsewhwere and points to 51 female wolves and probably  a few hundred males. Lack of archeological evidence does not rule out ancient dogs in any area but merely means it has not been found or may have been destroyed. This change from pure wolf (Canis lupus) to the dog sub-species (Canis lupus familiaris) probably occured about 15000 years ago. There is evidence of wolves living close to man before this.

Work done in Russia with foxes, where they were selectively bred for "friendlyness" towards humans, resulted in unexpected morphology and colour changes in a few generations.

Most dogs kept as pets today have recent origins due to mans selectively  breeding for traits man requires. Around the world however there are still to be found dogs that have had little interference or selection from man. While there are differences between them they also share the common Long Term Pariah Morphotype (LTPM) and are classed in the spitz or "primitive" group. They include Australias Dingo and the New Guinea singing dog, Americas Carolina, Africas Basenji and others in Asia and India. Some do not bark but use other vocalisations and some have distinct behaviour characteristics such as the Basenjis cat like cleaning.

In the above photograph courtesy Lars Bjurstrom, rock carvings recently discovered in Saudi Arabia and thought to be predate the exodus of Moses from Egypt, dogs of the typical LTPM appearance are seen with a hunter. Other carvings in the area show pariah dogs on leads held by a man, while others seem to depict sighthounds. Sighthounds of the Saluki, Sloughi or Arabian greyhound are better know and were, in ancient Egypt, considered the dog of the pharaohs and princes.

The LTPM dogs are still found throughout the Arabian peninsula and surrounding countries, They live free on the outskirts of towns and cities and anywhere they can scavenge for food. They also are found loosely associated with Bedouin acting as watchdogs and looking after goat and sheep herds. 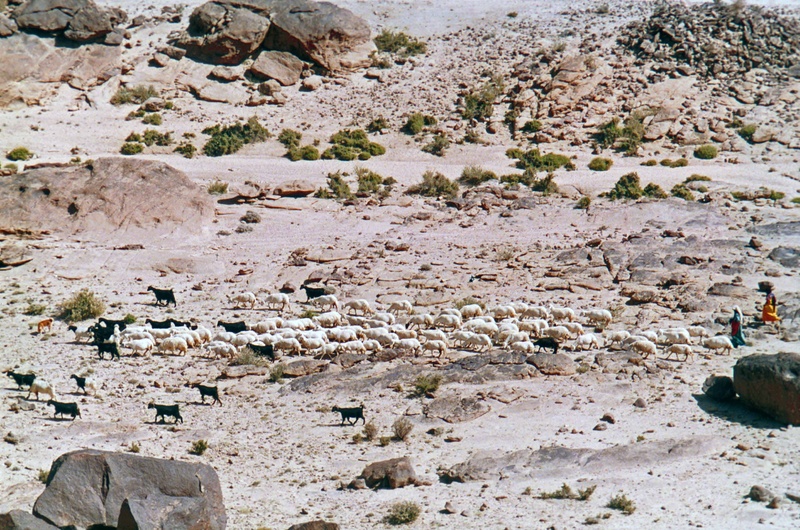 In the above a "desert dog" is leading the way with this Bedouin herd in Saudi Arabia - enlarged below. 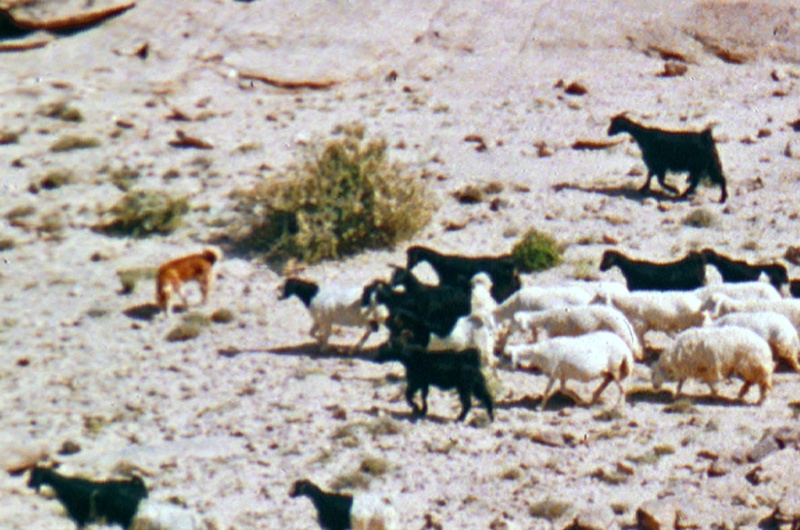 These dogs are characterisically very alert and wary of strangers or objects they are not familiar with. This has enabled them to survive in harsh conditions with little or no help from man. Historically they have probably moved around the Arabian peninsular, eastern mediterranean and north african countries following Bedouin and camel trains used for trade in the past.

They are probably the same dogs mentioned in religious writings and were likey used by the Druze and some likely accompanied Moses on the exodus from Egypt.

Recently an Austrian and her husband, Dr Menzel, recognised this type of dog as being more suited to local conditions than imported European recent breeds. She found them adaptable to domestication and trained them for a variety of work including search and rescue, and explosive detection. She eventually gained international recognition of them as Canaan dogs drawing predominantly from dogs in the area she lived in, though some early dogs accepted into official records also originated in Syria, Jordan and Libya.